The machine achieves the highest sewing speed of 2,500sti/min among those with a similar sewing area. With its higher productivity, the machine performs various kinds of stitching making the most out of its wider sewing area in various sewing applications such as attaching handles to bags and pouches, attaching belts, sewing many small parts at a time, attaching parts to shoes, and sports shoes (one pair of shoes) and sewing airbags.

The cycle machine, which has a wider sewing area, achieves an improved seam quality, increased productivity, and easier operation

The machine not only achieves higher productivity due to instantaneous increases/decreases in sewing speed at the beginning /end of sewing and increased speed of thread trimming but also achieves flexible responsiveness to materials to promise enhanced seam quality due to JUKI's unique active tension and programmable intermediate presser.
The AMS-EN Series has been favorably received in the market because of its ease of use, achieved by the smooth setting of sewing material and the large-sized color liquid crystal touch panel.
The following two additional models are now added to the Series:
The AMS-224EN-4530 [450mm(X)×300mm(Y)]
The AMS-224EN-6030 [600mm(X)×300mm(Y)]
A newly developed encoder-controlled stepping motor system has been adopted for the X-Y feed mechanism. This contributes to more accurate sewing performance and increased productivity.

The AMS-224EN has been designed to lay importance on electrical power saving for increased economization. The machine has adopted the direct-drive system utilizing a compact-sized AC servomotor to drive the machine head. It has also adopted an encoder control system that drives the stepping motor with a minimum electrical power according to the weight of the material and stitches length for the material-feeding X-Y drive. With these two systems, the average power consumption of the machine is reduced by 30% during operation and 45% during standby as compared with our conventional model (AMS-224C) which does not incorporate the encoder control system.
*The graph provides a comparison between the AMS-224EN and AMS-224C when sewing shape tacking (approximately 1,000 stitches) of the upper parts of right and left shoes under the continuous sewing mode.

The position of the feed can be checked during sewing by means of the encoder-controlled X-Y drive stepping motor. This remarkably improves the accuracy of the feed. As a result, deformation of a sewing pattern which is likely to occur when sewing at a high speed or sewing a heavy-weight material is significantly reduced.

The frame (needle bar unit and thread take-up unit) is lubricated with grease, and the hook is fed with a minute quantity of oil from the oil tank.
JUKI’s advanced dry technology, which is utilized in a number of our sewing machine models, protects your products from being stained with oil.

The large-sized liquid crystal touch panel, which has been developed to ensure ease of operation, dramatically increases efficiency in edit work

The IP-420 touch panel offers market-proven ease of operation. It is provided with widescreen and programmable functions. Data can be input/edited while visually checking the needle movement.
The color LCD unit displays sewing data such as stitch shape, needle thread tension, enlargement/reduction ratio, sewing speed, and the number of stitches at a glance. The IP-420 is provided as standard with 14 different display languages.

Sewing data created with the IP-420 can be stored in the memory of the main body of the sewing machine. The memory storage capacity is 500,000 stitches and 999 patterns (max. 50,000 stitches per pattern) at the maximum. In addition to the CompactFlash 33 card, the main body of the sewing machine is provided as standard with a USB connector. Now, data can be input/output to/from various kinds of media (FD (floppy disks), SM (SmartMedia), CF (CompactFlash), SD (Secure Digital Card), etc.) by means of a USB thumb device and a card reader. The maximum number of stitches that can be stored in the memory for each medium is approximately 50,000,000.

With the programmable intermediate presser, the height of the lower dead point of the intermediate presser can be set according to the material thickness, thereby not only preventing troubles in sewings such as stitch skipping and thread breakage but also protecting the sewing product from being damaged by the presser. The height setting can be changed with ease even during sewing. The machine finishes beautiful uniform seams free from stitch skipping even on multiple parts of the material by the ideal combination of the active tension and programmable intermediate presser. 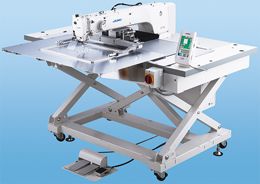 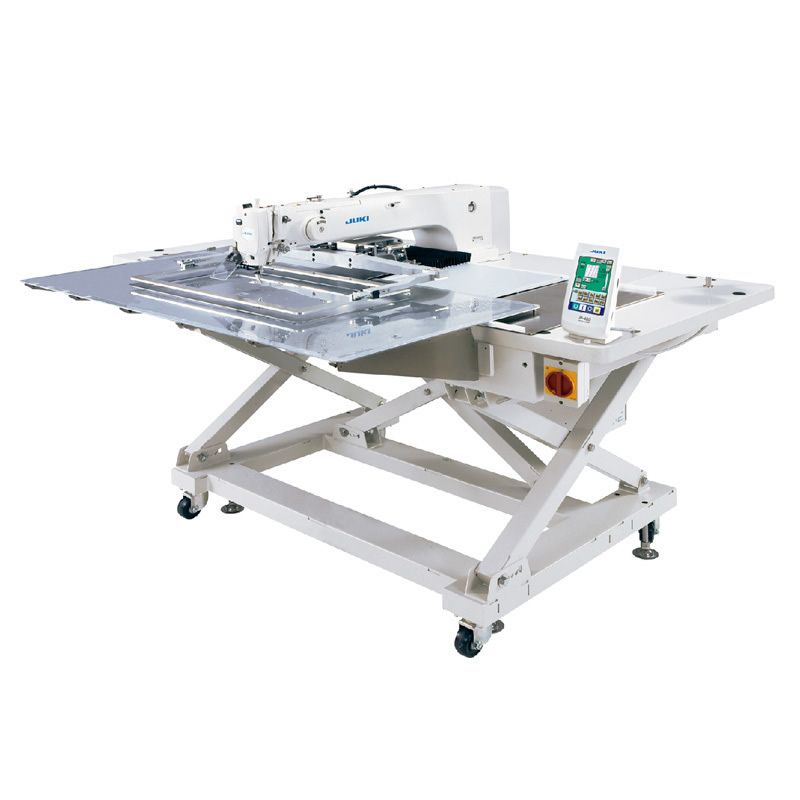 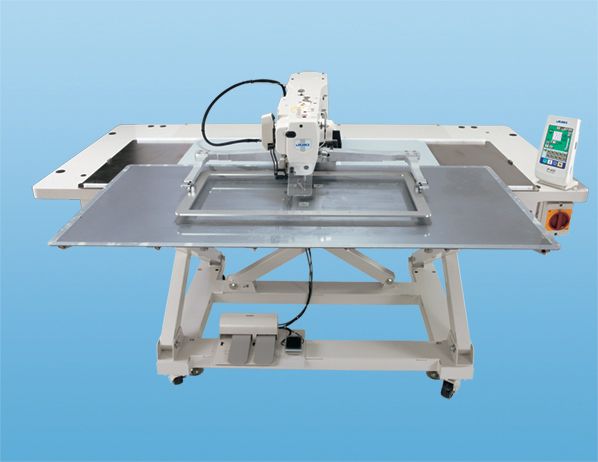